Allen Rucker grew up in Bartlesville, Oklahoma and has degrees from Washington University, St Louis, the University of Michigan, and Stanford. In the 1970’s, he co-founded the pioneering video group, TVTV, winning the Columbia-duPont Journalism Award. In the 80’s he wrote sketch comedy with Martin Mull, Harry Shearer, Fred Willard, and others, winning the WGA Annual Award for Comedy and two CableAce Awards. In 1996, he became paralyzed from the waist down from transverse myelitis. Post-paralysis, he has written or co-written eleven books, including three books on “The Sopranos,” one of which was a #1 New York Times bestseller, and a memoir of life after TM, “The Best Seat in The House.” He is chair of the WGA Writers with Disabilities Committee and the annual Media Access Awards and writes regularly for New Mobility magazine and the Christopher Reeve Foundation website.

Sandy Siegel is a force of nature. I have known him for almost twenty-three years and am continually blown away by the energy, commitment, and compassion he’s freely given to people with transverse myelitis and associated disorders. Like many of you, Sandy was the first person I talked to after my own injury who knew more than a few medical-school facts about TM. When you first speak to Sandy, you intuitively grasp the mantra often repeated in this expansive and definitive book on living with this weird and mysterious disorder – you are not alone.

Sandy claims early on in the book that “no one in the world has spoken to more people with TM” than he has. Without a doubt. He then explains why. “This is likely to be the case until the end of time, as it would be difficult to imagine another human being stupid enough to post their home phone number all over the internet.”

Sandy’s “anthropological” overview of TM – he’s not a doctor but knows this specialty cold from a laymen’s point of view – begins and ends with his late wife, Pauline, who first contracted TM in 1994. She taught him, as have many other sufferers, what he knows about living with rare neuroimmune disorders. This book is grounded in the myriad of personal, and often personally told, stories and the myriad of approaches or solutions to the inevitable presence of pain, loss of bodily function, self-doubt, and social anxiety associated with TM, not to mention how to deal with pesky matters like incontinence and airplane travel. Here Sandy, more than in any other book I know of on the subject, went to the source – actual TM’ers and their caregivers and friends.

The book is long, goodness knows, but never tedious or dry. Sandy can tell and retell stories and they are not only full of both the emotional and medical components of TM, they are infused with the main thing that makes this book great – Sandy’s voice. Throughout, Sandy is kind, patient, and non-judgmental in describing one’s adjustment to TM, even for those who push people away and never transcend the bitterness and loss.

Sandy is the rabbi of transverse myelitis — there to help and give comfort and not to profit personally. Answering the phone at 11:30 on a Thursday night to listen to and advise someone newly faced with TM is not a pathway to personal aggrandizement or even a decent night’s sleep.

Not that he hasn’t faced his own dark moments of guilt and inadequacy. Speaking as husband and caregiver stunned by his wife’s misfortune, he asks: “How does one experience an intense tragedy and life-changing event without running headlong into some self-doubt? I have had significant questions about my character throughout this entire experience with Pauline’s illness. I have experienced significant inner struggle between who I am and the person I would like to be.…”

As he delineates the reality of living with one of these disorders, Sandy is sympathetic but never less than blunt about the often-ugly consequences. He occasionally writes in sentences so direct and unsentimental that they almost read as aphorisms. Here is a sampling:

Sandy’s role throughout Pauline’s long illness was that of caregiver and despite his doubts, he was a stellar one. Very few caregivers know as much about the most intimate details of life with TM – spasticity, bowel/bladder failure, sexual dysfunction, infections, UTI’s, thoughts of suicide, the awful, often silent presence of fatigue – and what he doesn’t know, he has found some remarkable people to tell their own tales.

Some of these stories are heartbreaking. I will never forget Elisa Holt’s account of discovering that her first-born son, Noah, had contracted, at six months of age, Acute Flaccid Myelitis (AFM). In the blink of an eye, Noah went from healthy to paralyzed from the waist down. In facing what she calls “a parent’s worst nightmare; a nightmare I didn’t even know existed,” Elisa and her husband guide their little boy through what will surely be years of intense physical therapy in their collective effort to “take back AFM.” Her parting advice to any parent in the same situation: “You’ll make it through the wilderness.”

Sandy knows a hundred of such stories of struggle and courage and his empathy seems to know no bounds. One of my favorite passages in the whole book involves those with TM, even if they are physically impaired, who have many ongoing side effects that others can’t easily see. Sandy offers up his sage if acerbic advice: “Perhaps people with TM should think about wearing a sign with print that says, ‘I haven’t peed in eight years. My feet and legs and butt are in so much burning pain that I would scream all day long if I were allowed…my fatigue has me so totally exhausted that I need a nap ten minutes after I wake up. I have transverse myelitis…and because you can’t see the symptoms…doesn’t give you a pass to make judgements about me in any way.’”

I could go on picking out sound bites of hard facts and insights into the mindset of someone with TM and still feel I’ve failed to convey the scope, depth, and magnanimous spirit of this definitive “brain dump,” as Sandy calls it. As it began with Pauline, so it ends with Pauline. She is his lodestar on this journey. Without Pauline’s illness and her openness about it, and Sandy’s remarkable tenacity and passion, there probably would never have been a Transverse Myelitis Association -now called Siegel Rare Neuroimmune Association – and hundreds of thousands of sufferers, myself included, would be left not knowing how to deal with the next day, or the day after, how to find expert medical help, or how to discover a community of people who know exactly what you’re talking about. Sandy has helped build a public edifice of knowledge and goodwill that will far outlive him, and he has now written a book full of the wisdom of a lifetime dealing with TM.

We all owe him our supreme gratitude. 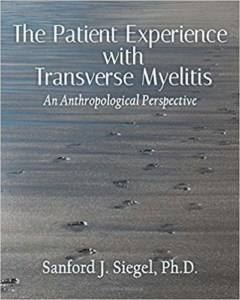 You can order a copy of the The Patient Experience with Transverse Myelitis by Sanford J. Siegel, PhD on Amazon here. Both paperback ($18) and Kindle ($2.85) versions are available. The book is self-published. All proceeds from sale of the book are donated to SRNA.

Jonathan Narducci – the Onset of TM
Scroll to top