My Friday on a January morning in 2013 began as usual. I got up and got ready for work. I had just turned 36, my daughters were 2 and 4 and we were living a busy life. I had a slight pain in my neck that morning but didn’t really think much of it. I work in a school library and was having a pretty quiet day when suddenly the pain became more bothersome, to the point that I couldn’t seem to get any relief from it. I tried a heating pad, ibuprofen, lying flat on the floor, but nothing seemed to help. In tears, I called my husband and asked him to come get me because I didn’t think I could drive. On our way home, the pain began shooting down my right arm and chest and I told him to take me to the ER because I thought I might be having a heart attack. I remember laying in the car telling him where to find all the important account information and what to do about the kids. I thought I was dying.

When we arrived at the ER they asked me if I had anxiety, and I answered yes, as would anyone in my situation. They took me back to triage, checked my heart and gave me some type of opioid painkiller. It was about this time that I noticed my right fingers were tingling, like they were going numb, and a spot on my face next to my nose was tingling as well. Several times I told the nurse these concerning symptoms and she dismissed my concerns with, “oh, it’s just your anxiety.” I asked to see a doctor, and was assured I would. Several hours later, they came in and said I was being discharged. I asked again about my numbness and to see a doctor and once again they blamed it on my anxiety. I was unable to walk and they had to get a wheelchair to take me out of the ER. I’ll never forget sitting near the front desk in that chair as the nurse picked up the phone and called to the back. Her words were, “Are you sure you want to send her home? She seems really sick.” But home I went.

I woke up the next morning and I couldn’t move from the waist down. Back in the same ER that Saturday they immediately began the battery of tests they should have started the day before. Cat scans, MRIs, and bloodwork, which determined that I was having some type of inflammatory event in my spine which was causing some demyelination. They initially thought it was Guillain-Barré, but my presentation was apparently different than usual for that diagnosis. After a spinal tap at midnight, the neurologist on staff felt pretty sure that I was suffering from Transverse Myelitis, and started me on a five-day course of high dose IV steroids. I spent six days in the hospital, and returned home a changed person. I felt scared, defeated and confused about the new body I was living in. I was bruised and swollen from heparin and steroids and I was in pain from the nerve damage.

I began looking online for information and found several Facebook communities of others suffering from TM. Through them I found SRNA. All of these groups helped me through some very dark and scary days. You can never underestimate the power of a kind word or encouragement from someone who has walked in your shoes. These online support groups are a life-saver for many. I am thankful every day for all the virtual friends I have, who I know understand my struggles and triumphs. 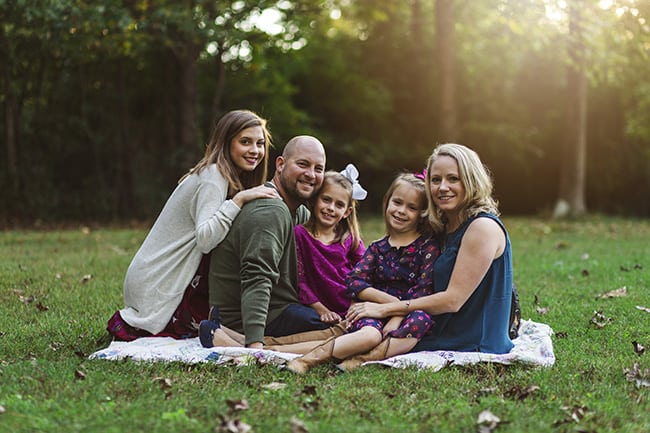 In January of 2017, I will turn forty and it will be four years into my journey with TM. The past four years have been a roller coaster of emotions for me. I have had to learn a whole new way of existing. I have seen the toll that TM has taken on my family who are always there to support me. I mourn for the life and body I had before TM, but I celebrate that today I am able to walk and work full-time. While I have many days where I wonder “why me,” I also have many days when I think “I can do this,” and I do. My illness and its aftermath have shown me how to appreciate life, to value friends and family, and to appreciate each day that I am allowed to grow older.

The most difficult part of this journey has been not being able to live the life I had envisioned. I miss my kids’ outdoor sporting events because I can’t take the heat. We say no to social functions because some days I am just too tired. Some days my bed is the only place I can successfully be. I have come to know my limits and to respect them.

At one point in the first year of my diagnosis, I met with a lawyer to talk about suing the hospital who sent me home that Friday night, despite my obvious and increasing neurological symptoms. In the end, it would have been a difficult and expensive case, and I opted to just move on.

My hope for the future is that SRNA will continue to advocate for those with rare neuroimmune disorders. Had the staff working in the ER at the hospital I went to been more aware of the signs of Transverse Myelitis, they could have started treatment sooner and the damage to my nerves might have been minimized. With more awareness of the signs and symptoms, perhaps others can be spared some of the devastating effects of this condition.

TM is a part of me, but it will not define me. As a faith filled person I have often prayed for answers, and direction. The answer has always been the same, “Do the work. Stay the course.” These are the words I will live by.