On April 9th, 2017, I was told I had transverse myelitis (TM). Like many people, I had no idea what this meant, so I thought, “Ok, when I get home, I’m going to Google this thing.”

Well, I didn’t get to go home. Instead, I got to lie in a hospital bed for the next four days on a solumedrol drip while simultaneously getting tested for every disease known to mankind. At one point, the nurse said to me, “Now you know what a pin cushion feels like!” She wasn’t lying. My arm was so bruised and puffy from the needles that it looked awful. However, I was not worried about how it looked. I was more concerned with how it felt. Because I felt nothing. For some strange reason, all of the sensation in my arms, hands, and legs had disappeared. While I had full range of motion, the feeling was gone. The best way for me to describe the feeling is to think about both arms and legs being asleep, like when you wake up in an awkward position.

For the next few days, there was a constant parade of doctors and nurses poking, prodding, and asking questions. The worst part was when nobody was around because I realized I was in a place very few people understood. So, in the middle of the night, I finally got a chance to Google “transverse myelitis.” Thank God, it led me to SRNA (formerly the Transverse Myelitis Association). The resources on this site helped me know I wasn’t alone and, more importantly, that I was going to be ok. 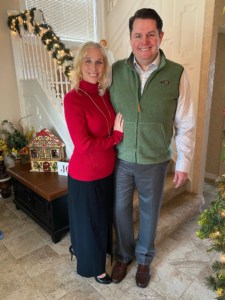 The tests continued for many weeks, as did the concern. SRNA was always there to provide comfort. Eventually, I would be diagnosed with an atypical form of multiple sclerosis. Five years later, I’m still here and full of life. My awesome wife Christy is my everything, and I love this picture of us taken at Christmas. She is beside me, always, allowing me to lean on her for support. I still can’t feel much in my arms and legs. I still feel like a pin cushion every now and then due to the semi-annual infusions of Rituximab and the constant testing and monitoring. But I’m smiling because I am part of an unbelievable community called SRNA, and I know, no matter what, I’m going to be ok. On behalf of my amazing wife, my four incredible children, and our two dogs: thank you for all you have done for us.