The doctors didn’t know why it happened. Or how. All they knew is what happened. They knew because they had seen it in other people. My disease. My issue.

I was one in a million and have something in common with 33,000 people. We all have different forms of it. Some can walk but have unbearable nerve pain. Some can walk but can’t feel their legs. Some can’t walk at all and some can’t move any parts of their body. So, I’m considered lucky. All that was affected were my legs. I’ve met a lot of people who have the same disease. Some were older, some were my age, and some were younger. And they were from all over.

I remember it all. The feeling of my legs giving out as if they had just given up, and being in a hospital bed for three weeks. I spent most of my time there but sometimes I would go to the lobby with my physical therapist, or go to their office room. My room was huge. It was one of the newer ones. I got used to the uncooked hospital food. Some of our friends brought food to my room for dinner.

Then the rehab journey began. The day I got there, I had pancreatitis. Big word, I know. I couldn’t eat for 3-4 days. But eventually, it got better and I returned to rehab. It was hard. I was weak. But I had a great physical therapist. He made me laugh even when I didn’t want to. He was funny, nice, caring, and most of all he made sure I worked hard. We did things, like getting up on all fours and doing push-ups, or standing in a frame that held me up and simulated walking. My occupational therapist was a whole other story. The entire time she let me play board games. She made my day brighter.

I met one of my best friends in rehab. Her name is Amanda, she’s 15, and she’s from the Boston area. She fell down the stairs and broke her hip. I told her what happened to me and she said we could be there for each other no matter what.

People visited. They would bring food, games, presents, and things that you would think would make a person feel better. But the reality was that there was only one present I ever wanted; to be able to go home and back to school, like nothing life-changing had ever happened. To be treated as the same person they knew before.

I was able to go to my aunt’s house for Easter. When I was there, the feeling that everybody was staring at me and not the food, just made me angrier, and sadder. I wanted to leave as soon as possible, and I think my mom knew that. I also had to spend my 13th birthday in the hospital. Yep, I had a party in a hospital. A lot of girls came. My friend Amanda had left by then but she came back to surprise me. My aunt also surprised me with a private concert by one of my favorite singers from her hometown.

Eventually, I got stronger and the countdown to go home got shorter. My mom was there with me most of the time. She had the same emotions I did. It hurt me to see her so sad and frustrated at doctors and nurses. But we both knew why we were frustrated; it was because no one could tell us the answer to the only question we ever had. How does someone who has been extremely healthy their entire life end up spending two months in hospitals being monitored every day?

But no one knew. No one knew why or how. All they knew was that it could happen. And that it did. April 10th was the day it all changed. Over were the hospital stays, the checkups, the therapy sessions, and to be honest, it was bittersweet. I had spent two months with these incredible people who made me feel like I wasn’t different, like there was nothing wrong with me and they made me feel like I was still me. I returned home on a Friday and my dad and brother were anxious. They had a ramp built for me, put in a chair lift, got all the things I would be needing. While we were getting used to everything, our friends volunteered to make us dinners. The school had asked us to come in and see if I could fit under the desk with my chair. And surprisingly enough, I did. They told my family they would make a few changes, and overall it was good. And so life resumed. I went back to school that Monday.

Everyone greeted me with open arms and said that if I needed anything, all I had to do was ask. But for the past two months, I had been asking questions that could never be answered simply because no one knew the answers. It was discouraging not knowing.

Sometimes I wonder what would have happened if I hadn’t decided to go back to school on that Monday, or if I hadn’t been in the hospital for two months, or if I hadn’t gotten paralyzed. I could’ve chosen to be an introvert, and not go to school, and I could’ve chosen to not live my life. But then I wouldn’t be the person I have become a year and two months later. I wouldn’t have had all of the experiences I’ve had, like going to SRNA camp at Center for Courageous Kids in Kentucky and meeting people from all over the world who were just like me, including a former Paralympian, or going to a wheelchair convention where people go to see new technologies and products being made for wheelchair users. 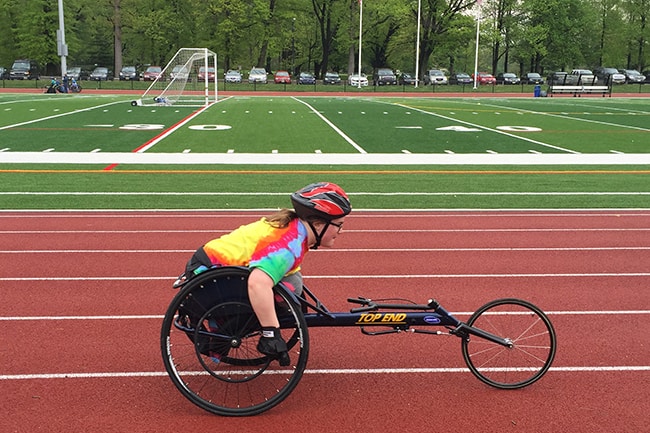 And if I hadn’t chosen to live my life, I would be going against everything I have ever believed. I’m not always going to be able to do things my friends are doing, or things my family can do. But I can go to high school, and college, and I can get a well-paying job. I can do anything I want; I may just have to do it in a different way than most everybody else.

People call me strong, brave, courageous. But I don’t consider myself any of those things. I think the people who are the strongest are the ones who have nothing and no one to live for, yet, they still get up every day and fight through whatever they’re going through. I know people like that and to me, those are the people that are the strongest. I’m just me. I’m a fourteen-year-old girl who chose to live, who chose to fight, and who chose to keep going, but that’s only because I have something to live for; the people reading this. So here is my story, and I promise to whoever is reading this – life does go on.