It was early in the morning of October 7th of 2007 when I was awakened by severe pain shooting down my right arm. As I tried to stand, thinking it was simply a nerve irritated by the way I had been sleeping, a sensation washed through my entire body from the shoulders down and I could no longer support my own weight. A very defined band circumscribed a line around my shoulders, directly over the center of my sternum. Above that line, pure normalcy. Below that line, zero appropriate sensation accompanied by severe, electric-shock type reaction to touch. I could no longer lift my arms, could not sit up on my own, and had no ability to contract a single muscle below my shoulders. I was convinced that I was experiencing a side effect of a very low dose muscle relaxant (occupational hazard of being a pharmacist!) and asked my husband to drive me to our community ER at the hospital where I worked. This ride was the single most painful experience of my life, including childbirth. A short helicopter ride to the university hospital an hour away, and I began to understand something was very seriously wrong. In the ER, the debate between a neurology versus orthopedic admission began after results of the four-hour MRI showed swelling of the spinal cord between the C6 and T2 vertebrae. Finally, neurology won out and I was transferred to the medical Intensive Care Unit (ICU) under the care of the neurology team. IV steroids were started along with precautionary antibiotics and antivirals (to rule out meningitis). Slowly, after a few hours then days, my arms began to cooperate again, and I began to regain some feeling in my hands. My legs were still like lead and my skin screamed at any touch or temperature extremes.

I cried three times during my ordeal, the first being in ICU. Anxious for answers, I asked a nurse if there had been any word of a conclusive diagnosis to which the nurse very clinically replied, “Oh it could be anything. They’re considering Lou Gehrig’s disease, among other things”. The possibility of developing a progressive musculoskeletal disease at age 26 was terrifying. After a few days, I was transferred to the regular neurology floor for further testing though all things seemed to point to transverse myelitis. Large academic groups came from several specialties and stages in education to study my case. At times some learners and teachers (mostly physicians) would forget there was a person connected to this disease and insist on demonstrating my painful reaction to touch for their groups. I could only support academia so much before I had to end the lessons permanently. It was here in the neurology unit that, after not seeing my 16-month-old daughter for days, my family was able to bring her in. She climbed up in my hospital bed, smiled her tiny face up at me, and laid her head on my chest. This was the second time I cried.

After 10 total days as a hospital inpatient, I was transferred to an inpatient rehabilitation facility. This was one of the most awful and degrading experiences. I didn’t have the ability to defend myself or run from harm, should it arise (e.g., fire or, God forbid, assault), which caused me great anxiety and panic. I begged anyone in my family to stay with me through the nights. 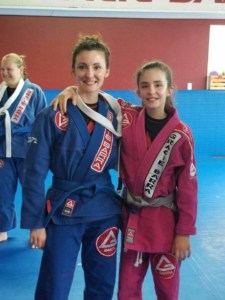 I began to relearn the muscle movement for walking again in a huge Transformer-looking machine called an auto-ambulator. After two weeks as an inpatient and several more as an outpatient with this facility, I started physical therapy back at my community hospital where I felt the most at home. After three months, I regained enough mobility to walk with the minimal assistance of a cane and was able to return to work.

My total progress since that year has been about 90%. I have significant sensory deficits in my hands, legs, and feet and still cannot feel the activation of a few major muscle groups. I can walk and even run a little but with a gait disturbance that tends to be more predominant in extreme cold. I worked with a personal trainer for regaining strength and took up yoga for balance in the first years following the illness. Both of these things I cannot recommend enough. I have found some of the biggest rewards, however, in Brazilian jiujitsu (Uha, Gracie Barra!!). TM left me lacking speed, balance, muscle mass, and coordination, and this grappling-based sport has helped me feel safer when I am out on my own or with my children (who also train). Best of all, jiujitsu is almost entirely ground-based so falling down is actually part of it! I humbly and gratefully received my blue belt in May of 2018, the biggest physical accomplishment I’d made in 10 years.

I’ve left out many of the painful details of this story, including the third time I cried, in the name of brevity. I am happy to share if anyone would like to hear it individually. In closing, I will share my most heartfelt thought from this experience: I never once asked “why me”. Because if not me, who then? My daughter? My husband? My mom or dad? No way. I was and still am happy to carry the burden if, somehow, it meant that someone else I loved did not. Additionally, my determination and resolve for challenges has grown indomitable and I chose to thank my TM for giving me a more grateful perspective of life.

Alone Together
Scroll to top