This was a complicated period in my life due to the fact that I spent 68 days in the hospital because of a recurrence of myelitis. I want to share this experience with other patients, their families and medical professionals.

I am 56 years old and was diagnosed with NMO (Neuromyelitis Optica) in 2008. I have received Imuran (150 mg/day) as treatment for the disease. I arrived at the Emergency Room of the Baruch Padeh Medical Center (Tiberia, Israel) with a recurrence of myelitis, even though I thought that the Imuran treatment was very effective for controlling my disease. But, here I was in the same situation as I was in in 2008.

During the 6 months before my recurrence, I received antibiotics as a treatment due to nasopharyngeal infections (symptoms included high temperatures, sore throat, voice lost, cough, and nasal secretion) produced by the bacteria staphylococcus aureus.

And, also, in the last month before my recurrence, I had felt and received a strong contusion in the quadriceps muscle of my left leg.

An X-Ray of my left leg showed muscular atrophy in the quadriceps muscles, osteopenia, issues with the knee, and a strong contusion in the quadriceps femoris muscle. As a treatment, I received analgesics and muscle relaxants.

A CT scan (Computed tomography) of my head and spine showed signs of chronic sinusitis and scoliosis and osteopenia. Magnetic Resonance Imaging (MRI) of the spinal cord showed demyelination of the dorsal column from T2 to T12. 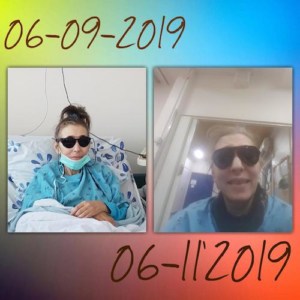 I  was admitted to the Medical Internal Room (under the direction of  the Dr. Subaj-Subaj) of the Baruch Padeh Medical Center (Tiberias, Israel). This was very important for my improvement because I was working in this Center between 2001 and 2008.

Treatment with steroids began to improve spasticity in my legs, and I started regaining movement in the right leg, beginning with slow movements.

I was transferred to the rehabilitation section of the same Medical Center and was treated by the medical professionals directed by Dr. Anna Gichka and Dr. Amitai Oberman (Room Manager).

There, I began to improve because of the combination of the medical treatments and physical therapy, and my relationships with the medical professionals were excellent and very important during all the treatments I received.

I then began to receive oral steroids and received a slow taper. Both my leukopenia and anemia improved.

During my treatments with antibiotics for nasopharyngeal infections, I noticed a neurologic improvement.

After two months, I was clinically stable, was a normal weight, could sit, stand, and walk slowly. My right leg recovered about 80% of its strength, flexibility and movement. I still have spasms in cold or hot temperatures. I am still not able to climb and go up or down stairs.

This is my personal experience about my recurrence of myelitis and nasopharyngeal infections.

Join me for #GivingTuesdayNow
Scroll to top