By Dennis P Wolf, Member of the Board of Directors of SRNA

Dennis P Wolf is an accomplished financial executive who has been the Chief Financial Officer of several public technology companies including Centigram Communications, Credence Systems, DataStax, Fusion-io Multi-systems, Hercules Technology Growth Capital, MySQL, AB, Omnicell and Redback Networks. Dennis took some of these companies public along with helping lead the acquisitions of some of these companies. Dennis has also served on eight boards as the Chairman of the Audit Committee and currently serves on the board of Codexis. Earlier in his career, he worked in senior financial roles at Apple, IBM and Sun Microsystems. Dennis holds a B.A. from the University of Colorado and an M.B.A. from the University of Denver.

An important aspect of Dennis’ life is that he is a survivor of 2 attacks of TM, with the first illness happening in 1992 while at the prime of his career. He was later diagnosed with NMOSD.

Dennis wrote a memoir, Wolfs Don’t Quit. The following is the third and final Part of Chapter 11. You can read Part I here and Part II here. 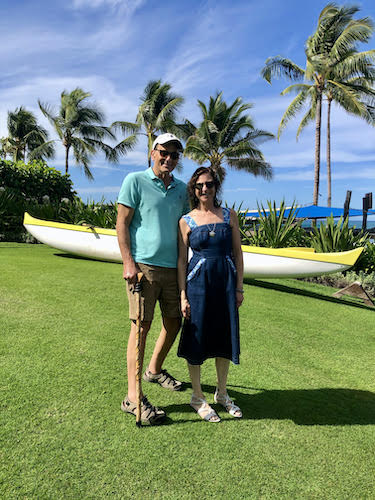 When I came home in May 1992 in a wheelchair, I had been out of Tali’s day-to-day life for 5 months and had to reassert myself as the father, however physically broken I was. I came into the house for the first time up a ramp that was built by Francine’s husband, my assistant at Apple. Standing at the doorway were the 3 girls so excited to see me back. I noticed, though, that Tali was clutching very firmly a clay figurine. I’m sure it was her way of coping with my coming home. I told Tali, “careful, you’re going to smash it”. She did and then said to me, “you’re not the boss of me anymore!” And so began the healing process for each child handled each in separate ways. It is sad that Tali’s first memory is my coming home in a wheelchair. She doesn’t remember me fully able-bodied, and so she worries about me a lot and more than she should have to. In September 2019, after my last relapse, Tali wrote to me, “you live your life with determination, resilience, and yet a wonderful vulnerability. Like a cactus you survive. Despite the heat and extreme circumstances, you flower.” Adversity is the lifeblood of learning to endure, thrive, and blossom.

I fought a hard battle, but Elise won the war. She rallied her troops, she tended to the sick, she smiled confidently at the future; and she did it silently asking for nothing in return and accepting me in a broken condition. And she had already thought through the next steps, which was to move on in the world in our new normal and to get me back. Every time I hear the song made famous by Bette Midler, “Wind Beneath My Wings”, I think it was written for me and to Elise. It so much who she is and what she means to me:

“Did you ever know that you’re my hero
And everything I would like to be?
I can fly higher than an eagle
For you are the wind beneath my wings

It might have appeared to go unnoticed
But I’ve got it all here in my heart
I want you to know, I know the truth, of course I know it
I would be nothing without you

Did you ever know that you’re my hero?
You’re everything I wish I could be
I could fly higher than an eagle
For you are the wind beneath my wings”

That is Elise. How does one deserve her? You do it by being the best version of yourself that you can be. You take your new normal and you make yourself an even better normal. This is not just for day 1 but for all of the days of your life. I try to do that for Elise and often fail, but I will never stop. We all danced at Shoshana’s Bat Mitzvah. It was a promise that was made to my wife and my daughter, and we keep promises. It also speaks to the fact that hope and faith work wonders. I remember saying at the Seder in 1992 that G-d has put on this earth his own cells, we just need to learn how to bind to them. Elise helps me figure that out.

Shoshana’s Bat Mitzvah was on December 24, 1992 at Congregation Sinai. At that time, Sinai was still more orthodox than conservative and didn’t yet allow girls to be called to the pulpit. None of us liked that, but it did allow Shoshana to pick her own d’rash for Friday night. She looked at 3 different portions, Kohelet 3:1-15, Shir Ha’shirim, and Job. Kohelet spoke to her because it was a season to heal, to build, to laugh, to dance, to embrace, to keep, to love, and for peace. And after the year everyone had, it was the balm everyone needed. Shoshana also related that when I left for Israel, my mom left this portion open in my parents’ apartment for when I would come home. She was pretty clear that Israel would change everything.

The time was bittersweet for those attending but triumphal for us because it was everything we had hoped for. At the Bat Mitzvah were my parents, Elise’s parents, her brothers Mark and Phil, Phil’s wife Claire, and their kids Shaina and Ruth along with my brother, his wife Marcella, and sons Bradley, Danny and Andy. Others there included my cousins Aba and Ziesel, my uncle Louie, Elise’s brother Jack, Grampa’s sister Marilyn, and all of our close friends. Of course, when I danced with Elise and Shoshana, everyone was tearful.

I am proud of Shoshana for being the bridge over troubled waters that year. Most kids of Bar and Bat Mitzvah age are given a portion and study hard and plan for a big party. For Shoshana, she had to wait 5 months for her father to come home in a wheelchair and still push forward for a few more months to see whether your family goal of the metaphor “dancing at your Bat Mitzvah” is met. That is a lot of pressure to endure, but Wolfs don’t quit.