I will never forget the day Daniel’s life turned upside down. On the morning of the 27th of December, 2020, Daniel played a game of chess with me and his brother before going to his room. Ten minutes later, we heard him screaming. I went up to find him in agony and pain. Within an hour, Daniel lost his ability to stand or walk. It was the perfect storm. We were in shock as to the suddenness of it and how quickly the deterioration happened. We took him to the emergency department, where he was admitted to the neurology ward at the Great North Children’s Hospital (GNCH), located in Newcastle upon Tyne, England, and later to the pediatric intensive care unit (PICU), where he stayed for a few days. Daniel was in GNCH for over six months before transferring to St. Francis Ward at the National Spinal Injuries Center at Stoke Mandeville Hospital, where he stayed for another month. Daniel was diagnosed with relapsing transverse myelitis (TM).

The period after Daniel was discharged home from the hospital was challenging. Many adaptations were needed in the house to allow Daniel to live his life somewhat independently. For me as a mother, this period was the hardest. I felt that I was left on my own. There was no one to guide me through the maze of services that would be needed to help meet Daniel’s needs. It was a new normal, and I did not know what I did not know. I sought support from charities like the Backup Trust and TM Support Groups like the TM Society and SRNA. Becoming a member early on in Daniel’s illness helped so much. I accessed the latest information on diagnosis, treatment, and therapy, which enabled me to ask the healthcare team looking after Daniel the right questions. Between the 8th-10 October, I attended the 2021 RNDS Virtual Conference, which I found extremely helpful and allowed me and Daniel to connect to other members of the TM community. We still communicate with a few of these people.

Daniel has had many setbacks since his discharge from the hospital and rehabilitation in July 2021. The first was at the end of August when he lost gains in the mobility he made after being released from the hospital and the ability to stand and take a few steps. He has also had two further periods of hospitalizations, one for a week for a urinary tract infection and the second a three-week hospitalization with COVID19 while abroad on holiday. Sadly, the irony of fate was that Daniel was in PICU on the same days in 2020 as in 2021. His fourth hospitalization within a year was by far the hardest for him. It seemed as if it was the last straw. He lost trust in his body. It gave up on him again. 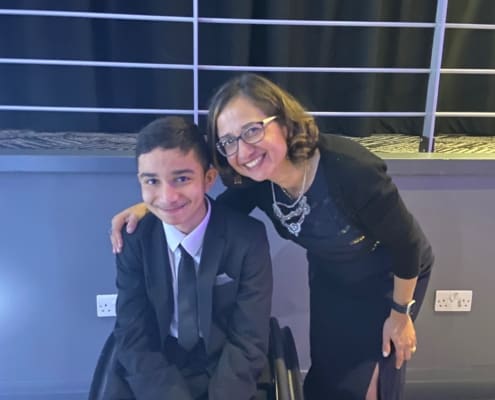 Despite all these setbacks, Daniel continued to surprise everyone with his resilience, drive, and selflessness, thinking of others despite all he had been through. Upon discharge from the hospital, he decided to fundraise for the Newcastle Hospitals Charity and Newcastle United Foundation, a charity supported by Newcastle United Football Club, to support carers as well as sick children in hospital by walking steps (and later, when he could not walk, by self-propelling his wheelchair). He raised just short of 6000 pounds to both charities. He used the opportunity to raise awareness about his illness on his fundraising pages: Just Giving and GoFundMe.

Daniel is a passionate musician and songwriter. He wrote many rap songs and received support from the Charity Youth Music and Skimstone Arts to record three songs in a music studio on discharge from the hospital. He received support and encouragement from TM support groups upon sharing his songs. Many mentioned how much they identified with his words. His first song, “Day by Day,” tells his story while in the hospital and his second, “Twice,” is the story of his TM relapse in May 2021.

Daniel has always been a keen athlete. He refuses that his illness and disability stop him from pursuing his sports ambitions. While in the hospital, he engaged well with sports and games provided by Newcastle United Foundation. Now, Daniel plays in a wheelchair rugby team and has ambitions to train in wheelchair racing. On the 9th of November, Newcastle United Foundation presented him with a United As One Helen McArdle Young Achiever Award. The video shown on the night of the award raised awareness of Transverse Myelitis. More recently, Daniel won the Outstanding Bravery Award in the Northern Children of Courage Awards (based in the North East of England) organized by St James’s Place Charitable Foundation to celebrate the achievements of children, young people, and their families and care teams.

TM can be a brutal illness, and Daniel has had it really tough. The uncertainty in the prognosis and not knowing what has caused it makes it a lot harder to bear. It is a lonely journey. There is a lack of understanding and awareness about this illness. Many mistakenly think it is all about mobility and that Daniel, similar to someone with a broken leg, will one day soon recover fully and walk normally. We really hope this will be the case, but we do not know. Sadly, there are many invisible signs of the illness that make life truly challenging. We live on the hope that one day there will be a breakthrough in research, and a treatment that fully cures people with transverse myelitis will become available.