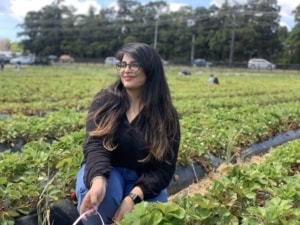 I woke up at around 8 am on 4 September 2020 and noticed my entire body was covered in rashes. It wasn’t painful, but it felt very itchy, and after using oil, the rashes were gone after a couple of hours. I went to see my doctor later that day, and they advised it was probably allergies. The following couple of days were pretty normal, but when I woke up on 7 September I felt very dizzy. I made my way to the bathroom but almost fell as soon as I reached it. I still had a little energy left and got back to my room. Thankfully, my partner decided to work from home that day and I told him what was happening. He went to get me an energy drink and something to eat because we thought I was probably just fatigued. I remember that while he was gone I couldn’t move. I thought, “I’ll call him,” but I couldn’t even grab my cell phone right next to me. He returned home and I ate a protein bar, hoping that it would magically make everything better. We waited for a while, but things were not improving. He finally called an ambulance and around 4 pm, I was taken to the hospital.

I remember being in the ambulance but have no memory of what happened the following week. It felt like I had slept for about a week and woke up completely paralyzed. I had lost the ability to speak and couldn’t comprehend things as I usually would. During those seven days, I had a CT scan, a brain MRI, and a lumbar puncture. The neurologists initially suspected that I had a stroke or a panic attack.  I had a second MRI on 17 September I learned that I had Acute Disseminated Encephalomyelitis (ADEM). It was very difficult for me to understand what was happening. The doctors said that I had been in contact with a virus, and instead of attacking the virus, my body started attacking my immune system, leading to a complete shutdown and inflammation in my brain.

I was on a heavy dose of steroids when I was first admitted, but I didn’t improve much. Afterward, I was told by the nurses and my partner that for those seven days, all I would do is scream, cry, and sleep, which thankfully I have no memory of. I responded well after receiving two days of intravenous immunoglobulin (IVIG). I began to start talking again, but my speech was still very slurred. I also received six sessions of plasma exchange which thankfully worked in my favor. When I received my first session, I noticed slight movements in my left arm. It was a very slow and painful process. By my sixth session, I could feed myself with my left hand, pick up a glass of water and make calls to my family. It may not seem like a very big deal to some people, but to someone who gained consciousness after a week to find out they’re paralyzed from the neck down, it felt like a ray of hope.

While I was in the hospital, a distant relative who lived here in New Zealand would often visit me, check with the nurses, and let my family know how I was doing. My partner was constantly in touch with my family, as they don’t live in New Zealand and couldn’t travel due to Covid-19 restrictions. They would go to the temple every day to pray for my well-being. 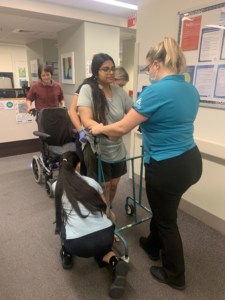 I worked with a physiotherapist and an occupational therapist pretty much every day to get my strength back. I remember the first time I tried to do some arm exercises, I failed miserably. My brain knew I was supposed to lift my arm, but my body wasn’t listening to it. For the first few weeks, I would wake up my partner at least five times a night. Sometimes it would be to rub my eyes, scratch my nose, or I was thirsty, or sometimes to get a blanket cause I was feeling too cold or to get off the blanket because suddenly I would start feeling hot.

I spent 43 days in the acute ward at Auckland City Hospital before I was finally transferred to rehab to focus on some physiotherapy for 10 days. I graduated from using a wheelchair to a walking frame. I was getting very homesick by this time and asked to be discharged, and I came back home on crutches. I was in the hospital for a total of 53 days. The longest 53 days of my life which I will never forget. I received outpatient rehab for three months, where I focused on getting back to my normal life.

My employer has been extremely supportive during this time. They understood my situation and not even once was I concerned about job security. I can’t imagine having to recover while also being stressed about paying bills. I resumed working part-time in December 2020 and now I’m back to working full-time. I work from home for about three days a week and the rest in the office.

I am truly thankful to the doctors and nurses that were there for me and took care of me as my family would have. Anytime I had any improvement, the nurses would be so happy, and we would celebrate every little accomplishment. They were extremely patient and calm, encouraged me to do things, and always believed in me. 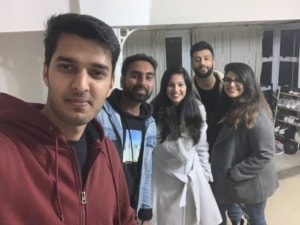 I am extremely grateful for my amazing partner. He stayed with me for over a month when I was in the hospital. He kept me going and believed in me even when I was ready to give up. I would see psychologists in the hospital, and they were always concerned about my mental health and if I was having any suicidal thoughts, but my partner, Arjun, always kept me going. He would make plans about traveling, date nights, or little things like watching a movie at home. Because of that I had an extremely positive attitude towards things and was always looking forward to coming home, recovering, and hopefully having somewhat of a normal life.

I read somewhere that hope is a passion for what is possible, and truly I live by it. My life is slowly getting back to normal. I stopped using crutches in December 2021 and have been consulting with a personal trainer. I work out around 3-4 days a week and have been getting my strength back.

I didn’t take any pictures when I was in the hospital because I hated being there. I never wanted to keep any memory of the things that I had to go through. I feel differently now. ADEM has given me a new perspective on life. I am truly grateful for so many things. My one piece of advice to someone who’s been diagnosed with ADEM is to be kind to yourself. It is going to take time but there is light at the end of the tunnel.